The Nebula X  has been designed to be portable, powerful and to give the best vaping experience. Using a hybrid heating chamber and an adjustable air flow the Nebula X was created to give you maximum control.

The Nebula X Herb Vaporizer will efficiently accept and diffuse heat. The result is a bowl that evenly heats, maintains a precise temperature.

(When you buy any vape today, you Get a FREE manual vaporizer worth £39.99 included in your order.) 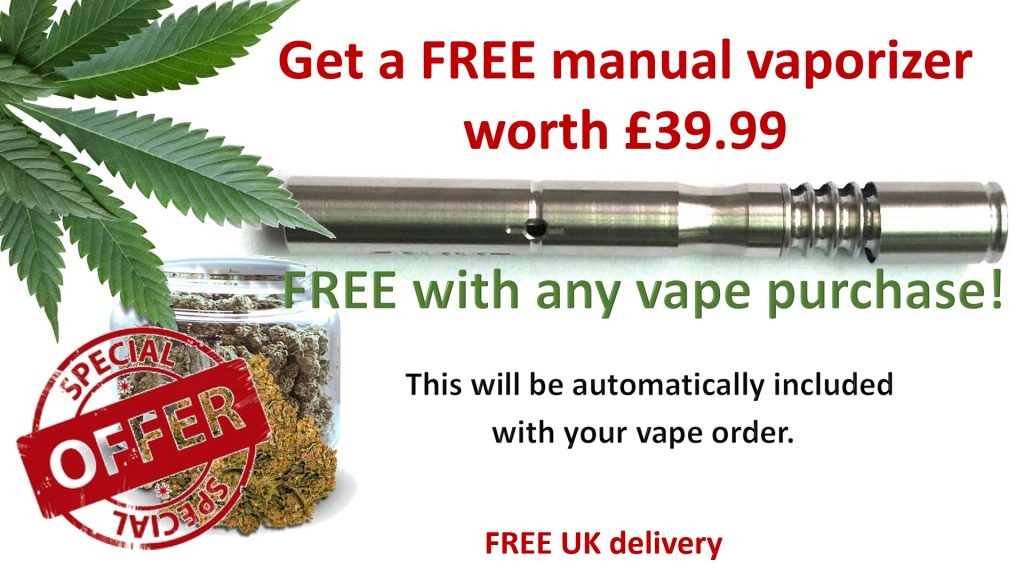 Thanks for that amazing product!
I ordered while there was a special, i got an extra manual vaporizer! At first they forgot it but i asked for (Service was really kind and helpful) and some days later i got it without any problems! The NebulaX is a really good convection/conduction vaporizer smooth to use and easy to handle. You can fill a good amount of herbs the damp is really thick and has it own taste. Before starting and after a full charge, the product had a fabrication smell so i left it open for a few hours and heated it up two times, without any herbs(I really recommend this for every user and think it is good to tell it all the buyers). The battery is a really monster and gives you a full day of vape(Have a second one to change, if it is not enough). YOU CAN CHANGE THE BATTERY! AWESOME!
I also love the little spoon included to clean or stamp your herps into or out the chamber. You also can regulate the airflow and the temperature from 70°C/158°F to 220°C/428°F stepless. The prize is really good and fair, although i ordered from Germany and had to pay in Euro.

THANK YOU GUYS FOR THE GOOD SERVICE AND THE AMAZING PRODUCT!

HAVE A GOOD TIME!

T
The Poopinator
Better than the One

I like the beep when it’s ready.
It stays cooler than my old Nebula 1.
I get 5 cycles to a battery charge

A
Andy H
So far, so good

Great dry herb vape if you're on a budget

a decent vape for the money

A
Adam
As good as the Mighty, in some cases better

The Nebula X gives the same incredible flavor as the original mighty as well as the amount of vapor production if that's how you like to vape, the chamber is made of the same material and as far as I know the body is too. A plastic which makes the device a lot lighter than you would expect, even with a battery in. The battery being replaceable means that in the years ahead the Nebula will still be useable where the mighty will require some expertise to get working again. The herb is cooked evenly and there is no burn whatsoever.

I love the fact that when the mouthpiece is folded down there is no gap to the chamber, you can adjust this easily with a screw which allows you to remove it for cleaning, meaning there is practically no smell unless you put your nose right to it, that way I can enjoy a couple of draws then turn it off rather than have it diffusing without me using it. The advantage to this device is that you don't have to smoke the whole thing once it's lit, like you would a joint.

There is a light on the front to indicate when it is heating and when it's ready to vape which is also accompanied by three beeps. I love this feature. I also have an air 2 which beeps when powered on and off but that's it. It's not a problem at all but I do like the audible and visual aids.

The Nebula stands up when set down which the original Mighty doesn't without an extra stand and I love the way it looks. It's an all round great vape which won't set you back £2-300. Nebula are kind enough to include a manual vaporizer which is much like the Dynavap M, saving you another £60, for free with the Nebula X. An unbelievable deal for an unbelievable vape.

Nebula was founded on the belief that we should all be able to take care of our bodies and minds.

This website uses cookies to improve your experience while you navigate through the website. Out of these, the cookies that are categorized as necessary are stored on your browser as they are essential for the working of basic functionalities of the website. We also use third-party cookies that help us analyze and understand how you use this website. These cookies will be stored in your browser only with your consent. You also have the option to opt-out of these cookies. But opting out of some of these cookies may affect your browsing experience.
Necessary Always Enabled
Necessary cookies are absolutely essential for the website to function properly. These cookies ensure basic functionalities and security features of the website, anonymously.
Functional
Functional cookies help to perform certain functionalities like sharing the content of the website on social media platforms, collect feedbacks, and other third-party features.
Performance
Performance cookies are used to understand and analyze the key performance indexes of the website which helps in delivering a better user experience for the visitors.
Analytics
Analytical cookies are used to understand how visitors interact with the website. These cookies help provide information on metrics the number of visitors, bounce rate, traffic source, etc.
Advertisement
Advertisement cookies are used to provide visitors with relevant ads and marketing campaigns. These cookies track visitors across websites and collect information to provide customized ads.
Others
Other uncategorized cookies are those that are being analyzed and have not been classified into a category as yet.
SAVE & ACCEPT